Seeing the Bigger Picture: ‘STEEPLED’ and ‘The Great Curtain’

Futurology is a difficult and inexact science, with a poor history of getting it right.  However, there are ways of giving yourself a chance or, at least, avoiding some of the more obvious mistakes and oversights.  This post looks at a tool for considering the bigger picture in futurology and reflects on the results of using it with various user groups.

We’ve made the point before that technologists aren’t necessarily (or solely) the best people to ask what the future may hold because:

Of course, there’s probably a parallel observation to be made about any focused specialist in a particular field (economists, lawyers, politicians, etc.) but the observation doesn’t invalidate 1 and 2: it just shares the blame around a bit.  So, what can be done to help, and where does it take us?

Well, we’ll have a go by introducing a tool called STEEPLED.  This has its origins in a strategic management tool known as PEST Analysis.  Originally, the letters stood for ‘Political’, ‘Economic’, ‘Social’ and ‘Technological’.  Then, historically, adding ‘Legal’ gave SLEPT, and ‘Environmental’ made PESTLE.  Then, finally, ‘Ethical’ and ‘Demographic’ produced STEEPLED.  The definition of the terms is fairly self-explanatory but there’s a brief reference available.  (Note immediately that ‘Ethics’ is a late addition – an afterthought – and even ‘Legal’ and ‘Environmental’ were given consideration some time after profit: ‘Economics’.  This is very relevant later.)

STEEPLED provides a framework, in principle, for looking at the bigger picture when thinking about the future.  There are various ways in which it can be implemented:

Think of a topic for which a statement can be made in any of the main categories.  For example, Social: ‘People don’t talk to their neighbours much any more’.  Then find a contribution from another category that either supports or argues against it with a more powerful argument, such as, Demographic: ‘The aging population problem is going to make that even worse as people become more and more isolated’.  Then see how far you can go by ‘trumping’ each statement. in turn, with a different category.  Perhaps, Political: ‘There will be far worse divisions than that if terrorism strengthens its grip – people won’t even leave their homes‘, then, Technological: Terrorism, caused by humans, isn’t half as bad as when robots take over the world and get rid of us all!‘.  Finally maybe, Environmental: But when that super-volcano under Yellowstone Park erupts, we’re all be done for: humans AND robots!‘.  [OK, most of these points, even their categories, are contentious – and the final few moves might be similar in many cases – but it’s just a bit of fun!]

A more structured, and more powerful, application of the framework involves the use of a number of volunteers: a study group or class of students …

Use the following chart as a guide … 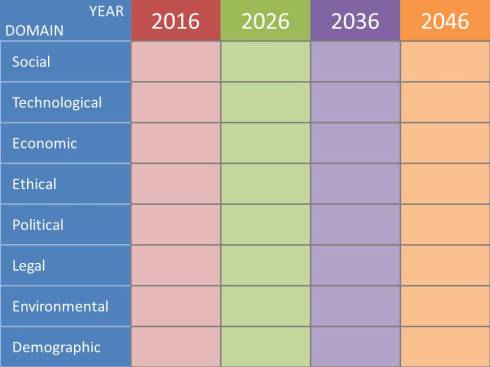 Divide the group into sub-groups and, depending on numbers, allocate each sub-group either a complete STEEPLED category (‘Social’, ‘Technological’, etc.) or (for very large groups) a STEEPLED category and year (2016, 2026, 2036 and 2046) – or some suitable compromise.  (You can try to look further into the future if you like but, in practice, it doesn’t achieve much – see later – and 2046ish is some people’s estimation for the Kurzweil Singularity anyway and it may be difficult to look far beyond that.)

For each STEEPLED category and year, ask the allocated group to think about what the world might be like at that point in the future with respect to their particular topic.  Get them to think about key events that might happen around that time or big issues that may have to be addressed or overcome.  They could even perform a mini SWOT Analysis, if that helps them to focus.  Ask them to note down the main points in short, bullet-point form.

When the groups have finished, start collecting in the results and filling in the table.  Either do this on a shared visual display so that everyone can see and discuss or – much more fun if you have space – stick them up on a wall.  As each element is reported, discuss the key predictions and allow the groups to make minor changes if they wish – to reflect input from all the rest.  Here’s one example from the ‘Political’ category: 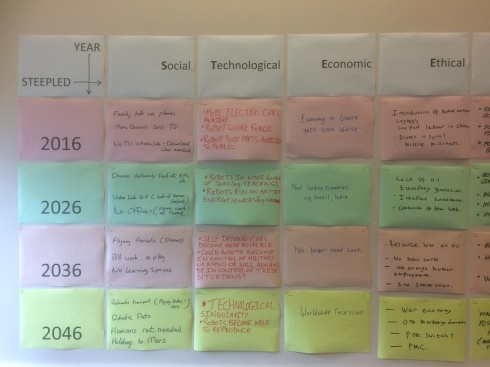 Once, the chart is complete to everyone’s satisfaction, take a step back (literally if you’ve stuck them to the wall) and see if there are any patterns that emerge.  In particular, read down the columns for each year in turn (across all STEEPLED categories).  If your group is right (even only partially), this will be a snapshot of what the world might be like in that year trying to take the bigger picture into account. 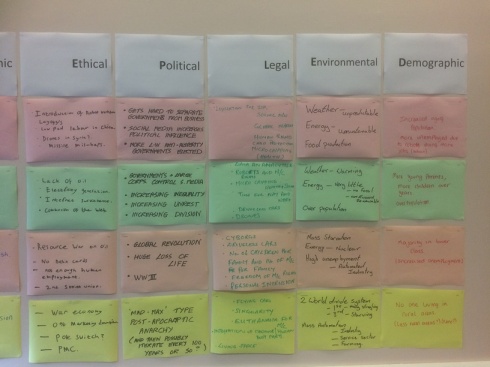 Of course there’s absolutely no guarantee that the results will be accurate: only time can tell that.  However, experience with trying this with a variety of groups (ages, backgrounds, etc.) yields some pretty consistent, strong and interesting results across all categories.  The following general pattern is absolutely typical: 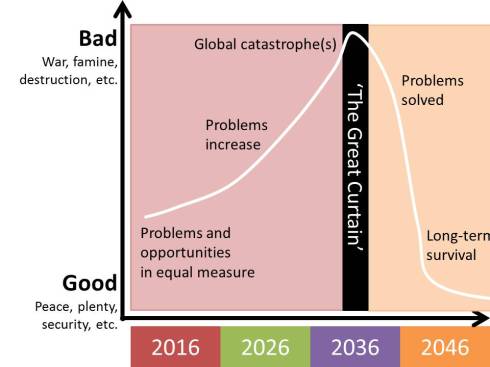 Although detail varies considerably, the essential story, repeated consistently, is that of ‘The Great Curtain‘ (TGC).  This is the general belief that humanity will have to pass through a key period of, possibly devastating (environmental, social, technological, economic, political, etc.) crisis before being allowed to settle down to a permanent and stable future.  The only point on which there isn’t universal agreement is whether we survive at all – we may not be able to get beyond ‘The Great Curtain’.  It’s certainly hard to see past it.  (Hence the name.)  An alternative scenario is that the cycle will repeat over time.

So how realistic is this, really?

Well, firstly, the timescales are probably arbitrary.  The notion of escalating difficulties, then overcoming a crisis (or crises) may reflect the accepted model of a book or film plot.  If we replaced the 10 year intervals with 5 year (2020, 2025, 2030, etc.) we’d probably get much the same thing.  The hardest thing about predicting trends isn’t the trends themselves but the timescales.  We’re not claiming that TGC will occur around 2036.  That’s probably not the important aspect of this.  The issue is whether TGC is credible in essence.

Do most ‘futurologists’ see it this way?

Well it depends on the futurologist: there are broadly two types.  Those who try to look at the bigger picture, generally do suggest some form of TGC.  They recognise that a combination of technological and wider social and ethical questions will probably give rise to one or more crises in one form or another (although they argue a fair bit about what form these may take).  On the other hand, those futurologists that focus purely on technology, generally see technology as solely a force for good.  If they recognise wider social issues at all, they often fall back on the notion of technology coming to the aid of humankind in the long run – rarely harming it.  (OK, this is something of a sweeping statement, reflecting a general trend rather than realistically pigeonholing each and every individual.)

So, is ‘The Great Curtain’ a myth?

Probably not.  There are several possible components of TGC that look real enough today although, interestingly enough, they span many aspects of the STEEPLED model.  These are some (listed purely alphabetically so as not to imply significance):

And across all of these issues (and others), political and economic questions and problems are at the core.  Our current system of profit-driven capitalism has either caused the problem or can’t deal with it … or both.  In the world today, nothing happens unless someone profits from it.  OK, there’s a small effect from economic and political pluralism in the sense of public favour for businesses seen to be doing right and governments have to give some consideration to providing for the public at large – otherwise they eventually get voted out – but these are tiny, and temporary, inputs to the model: most of the world, and what goes on in it, is driven by profit.  Consequently:

Now, you really have to ask if this is all remotely stable?  And the answer is probably NO.  So, what might happen?  Well, there are few broad possibilities:

And, ultimately, this may answer the Fermi Paradox?

One way or another, things can’t – and won’t – stay they way they are.

This all makes ‘The Great Curtain’ look pretty likely.  Then what?

Chair, Clwyd South Labour Party; Professor of Computing Futures, Wrexham Glyndwr University END_OF_DOCUMENT_TOKEN_TO_BE_REPLACED
This entry was posted on Wednesday, January 6th, 2016 at 1:10 pm and tagged with Fermi Paradox, Futurology, Predicting the future, Social impact, The Great Curtain and posted in Computer Science, Engineering, Industry, Philosophy, Politics, Science. You can follow any responses to this entry through the RSS 2.0 feed.
« Santa in the Continuum
Known Unknowns »

2 responses to “Seeing the Bigger Picture: ‘STEEPLED’ and ‘The Great Curtain’”