Santa in the Continuum

[Specially for Alex Irvine, who is either having trouble getting his head around infinite sets or still believes in Santa Claus: we’re not allowed to say which]

Father Christmas has a problem. The Intergalactic Department of Work and Pensions (IDWP) has threatened to cut his tax credits because he apparently only works one day a year. He’s tried to point out that he’s the head of a vast multinational organisation of elves and reindeer, who themselves work all year round, but that doesn’t wash with the IDWP boss, Ian ‘Dunkin’ Smiff, because his dad didn’t go to public school. 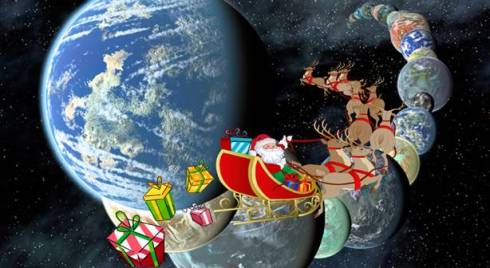 In his ‘days off’, Santa’s been told by the IDWP that, to keep his tax credits, he has to deliver presents to children on other planets as well. This proposition was met with a certain level of complacency from Santa and his Head Elf, Boz, until it was pointed out to them that there might be an infinite number of them.

Santa consulted his top reindeer, Rudolph, who, as we know, is magic.

There was a slight pause, during which Father Christmas looked pretty crestfallen, before Rudolph continued …

Santa brightened considerably, until Rudolph added as an afterthought …

Father Christmas turned to Boz, who just shrugged his shoulders. The three of them, now utterly confused, decided to send for Nureyev to see if he could help. A messenger elf, Phiz,  was dispatched to St. Petersburg that very evening.

Three minutes later, a pure-white reindeer, wearing Cossack boots and a big red star on his nose, landed on the North Pole runway.

Father Christmas searched out the letter from the IDWP and handed it to Boz, who scanned it for the essential detail …

They all had another sherry to celebrate.

Sure enough, when they tried it out, it worked like a dream. Nureyev visited each of the countably infinite planets in 1-P1, 2- P2, 3- P3, … order, Rudolph solved each planet’s TSP non-deterministically and Father Christmas delivered the presents. It looked like his tax credits were saved.

However, about a week later, there was another problem …

One afternoon, Rudolph and Boz were in the stable, playing ‘Chase the Holly’ for sherry oats, when Father Christmas rushed in, waving a letter, looking not a little put out …

Boz took the letter and examined it carefully, then sighed …

They went to break the bad news to Nureyev. They found him giving a group of young does rides on his troika. He glanced at the letter, including the new Q1, Q2, Q3, … list and drawled casually …

The others were taken aback …

It was agreed that more sherry was in order.

And it did indeed work. Now, Nureyev visited each of the countably infinite planets in 1-P1, 2-Q1, 3-P2, 4-Q2, 5-P3, 6-Q3, … order, Rudolph solved each planet’s TSP non-deterministically, as before, and Father Christmas still delivered all the presents.  Twice countable was still countable, it appeared.

But it didn’t stop there …

And the lists kept coming …

It was the evening on Christmas Day.  Father Christmas, Boz, Nureyev and Rudolph were all sitting around the table in the little parlour, drinking sherry. Rudolph was explaining the benefits of the free-market economy to Nureyev …

They were interrupted by Father Christmas …

But Boz was still looking thoughtful …

Father Christmas smiled a knowing smile and refilled his glass …

Chair, Clwyd South Labour Party; Professor of Computing Futures, Wrexham Glyndwr University END_OF_DOCUMENT_TOKEN_TO_BE_REPLACED
This entry was posted on Thursday, December 10th, 2015 at 8:19 pm and tagged with Continuum Hypothesis, Countable sets, Equivalence, Infinite sets and posted in Algorithms, Mathematics, Philosophy, Politics. You can follow any responses to this entry through the RSS 2.0 feed.
« ‘Will the Robots Take Our Jobs?’ Isn’t Really the Important Question
Seeing the Bigger Picture: ‘STEEPLED’ and ‘The Great Curtain’ »

2 responses to “Santa in the Continuum”