This follows on from last month’s post, in which we discussed the possibility of a future Shazam for People service and extends it to the concept of a ‘universal tracking system’ or real-world Marauder’s Map … 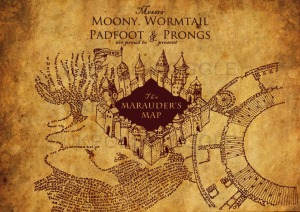 So, just how feasible is it?

Well, let’s start with a recap of what would be needed for Shazam for People (SfP), which is essentially:

In principle, a Real-World Marauder’s Map (RWMM) doesn’t need the (trivial) third part.  (However, in practice, SfP and RWMM might be expected to work together before long.)  For individual identification only, it just needs the clever hardware in (1) and the clever software in (2).  Another way of putting it is to say that it needs ‘Big Connectivity’, where:

(see The Real Internet of Things)

Well, it may not be as bad as it sounds because, if we have an operational SfP system and it’s running wherever we need RWMM to work then we already have the raw data being uploaded to the system.  All that’s required  is for this information to be fed back in coordinated form to the users of the system.  The large quantities of information for an individual in SfP are replaced by much smaller tagging information … but for everyone in RWMM.

In a way, this is similar to an existing real-time traffic alert system in some cars, in which vehicles are both the providers of raw data and users of processed information.  In fact, just as with a traffic system, RWMM users would probably only need a ‘local’ view, either of their immediate surroundings or those of an identified location or individual.

But, in fact, RWMM doesn’t have to rely directly on SfP to support it.  Data for the identification of individuals can be captured anywhere: cameras in the street, electronic scanning at service points, chemical analysis at entrances/exits, etc.  As IoT hardware gets more sensitive and the matching/identification software gets cleverer, individual identification will become easier.  (Remember all the options for identification in the previous post.)  Maintaining a global database and feeding this out to anyone wishing to use ‘the map’ will be trivial (although also possibly illegal – we’ll discuss this in a separate post).

In terms of the Big Connectivity equation, to make a ‘universal tracking system’ a reality, we’ll need advances in both the hardware and software, simply to deal with the scale, reliability and accuracy required.  Rather than simply identifying a single individual RTA, we’ll need to identify everyone RTA.  In other words, we need:

(It’s not a real equation!)

But this might not be that much to ask as time goes by?

Futurist/Futurologist. Socialist. Vegan. Doomsayer. Professor of Computing Futures. Author of 'CONSCIOUS' https://vicgrout.net/the-book/ END_OF_DOCUMENT_TOKEN_TO_BE_REPLACED
This entry was posted on Wednesday, September 2nd, 2015 at 10:32 am and tagged with Ethics, Harry Potter, Law, Legislation, Marauder's Map, Privacy, Real-time tracking, Sensors, Surveillance and posted in Algorithms, Computer Science, Computing, Hardware, Philosophy, Politics, Science, Software. You can follow any responses to this entry through the RSS 2.0 feed.
« The ‘Prof on a Train’ Game
Drop the Dead Donkey! (Is that really ‘News’?) »